Woke up: Off the coast of San Simeon, CA

As we approached the shore at first light, I was watching the lights of the town draw near. Our cruising guide indicated a population of around 389 people.  Certainly a town that size would offer a store, restaurant, laundry, showers, and internet café?  The Hearst Castle sounded interesting and a perfect 3 mile walk away.

Peter came on deck from below and pointed to the entrance buoy. To my chagrin, I had been admiring the lights of Morro Bay!  I was looking at the wrong frickin’ town!  What a moron!

San Simeon has nothing to offer; no store, no laundry, no showers, no internet café. Plus you’re not allowed to walk to the castle.  You’re require to take a tour bus.  Round trip fare:  $25 each.  But the bay was beautiful. 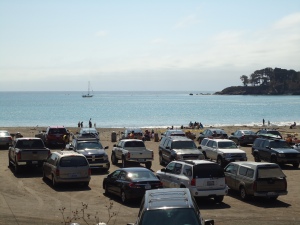 Sailing Down the Latitudes

Latitude and longitude are terms we all learned in school. Perhaps you remember, longitude lines are the long ones extending from the North Pole to the South Pole.  Never does latitude – the distance you are north or south from the equator – have more meaning than when you are trying to cover that distance at 3-1/2 miles an hour.

Portland, Oregon is at latitude 45 degrees, 30 minutes north. Of course you remember, every degree has 60 minutes.  But, did you know every minute is equal to one nautical mile?  Therefore, there are 60 nautical miles between each degree of latitude.

Whenever we are underway we log our latitude and longitude as reported by the GPS, once per hour. If all our electronic positioning equipment failed we would at least know where we were within the last hour.

Time can drag when you’re on watch late at night. But, it’s comforting to check off the minutes and eventually the degrees latitude as we go.

Naturally, after being at sea for three days and two nights I was anxious to feel solid land under my feet.  Watching the shoreline, Peter was becoming increasingly concerned about the size of the waves breaking all around the semi-circular bay.

When we left Penelope in the dinghy he said, “Let’s scope out the situation and see if there is a good place to land this thing.” I offered encouraging words, “You better find a way to take me to shore or I’m going to swim!”

I hadn’t really comprehended the hazards of driving the dinghy up onto the beach thru breaking waves until today. In the past I’ve watched Peter gun the motor while on top of one of the larger waves and ride it effortlessly onto the beach.  Unfortunately, this time, Peter was distracted by something on the motor.  His timing was off.  The dinghy stalled to the right and we were hit broadside by the wave we had intended to ride in.  I thought the dinghy was going to flip over.  Fortunately, we steered perpendicular to the force and merely took on a dingy full of water.  I spent the afternoon seeing the non-sites of San Simeon in wet clothes.

Later in the afternoon as we returned to the dinghy and prepared to motor back to Penelope I became fearful. My heart was racing as Peter explained what to do.

We counted the series of waves as they broke at the shoreline, three to five foot tall, frothing, noisy ocean. We watched as the waves increased in size through a series of nine with the ninth being the largest.  Following the largest, loudest wave they would subside to a gentle roll for 20 – 30 seconds.

I was feeling the adrenaline as I visualized the whole boat going upside down, me under water doing somersaults in the sand filled scum, eventually breaking my neck on the surface and being paralyzed from the neck down.

While we stood in water about knee deep, Peter counted the series. Immediately following the last big wave, I was to push the dinghy out as fast as I could and dive into the boat.  He would dive into the boat, lower the motor, fire it up and speed us out of harm’s way.  I recognized he had the more challenging task.  I put all my trust in Peter to get us over the breaking waves and didn’t let on how shaky my legs felt.

Just at the right time, Peter hollered, “Now!” I pushed the boat toward the ocean, grabbed ahold the straps and threw my leg over the pontoon tube. I watched breathlessly as Peter landed aboard, lowered the motor, tugged once on the pull cord and we sped away from the shore of San Simeon.

Everyone already knows everything there is to know about me. I wear my heart on my sleeve. To learn current details. Visit my blog, CruisingwithCaptainPeterandtheAdmiral.
View all posts by Susan M. Gierga →
This entry was posted in Travel Log, Uncategorized. Bookmark the permalink.