Today I Earned a PhD in Penelope

Peter has gone to America.  He left me alone in La Cruz de Huanacaxtle.  Two of my longtime friends from OWSA, Robin Smith and Lynda Davis, flew in from Portland to keep me out of trouble during my abandonment.

Today, the three of us decided to sail Penelope across Banderas Bay, approximately 15 miles, to the little fishing village of Yelapa.  I was feeling a little apprehensive about taking the boat out by myself but not apprehensive enough not to go.

We pulled her out of the marina at 10:00 am.  Just like backing a car out of the garage, I needed to turn the steering wheel to the right in order for the front of the boat to go left.  Since I don’t own a car and I haven’t backed Penelope out of a slip in almost a year, I initially turned the steering wheel in the wrong direction.  We were pulling out of the slip heading west when we needed to be heading east to leave the marina.  I quickly caught my mistake and corrected but instead of a single back up and pull out of here, it turned into an 18 point turn.  After numerous forward, back, forward, back, forward, backs to correct the problem, we were on our way.

On Our Way Photo by Lynda Davis

For the first time since I’ve been in Banderas Bay, the wind was light.  What is typically a three hour sail took six.

But, it was a blast.  We talked and laughed and snacked and drank lots of water to stay hydrated.  We analyzed our sail trim and tried different configurations to get the boat to go a little faster.  We had an excellent sail to Yelapa.

Just before 4:00 pm, we were getting close to our destination and needed to bring in the sails.  The head sail and the stacil went down without a hitch.  As I dropped the main, I wondered why we were having such a hard time flaking the sail.  It seemed the main was flopping all over the place.  Suddenly, I realized I had forgotten to put the lazy jacks in place.  “Oh, dear!  If you guys tell Peter I forgot to put the lazy jacks in place I’ll disown you.”  Back up goes the main.

Already flustered, we had a tough time getting hooked up with the mooring ball.  Every time I approached the ball, I came too close to the ponga driver and he had to speed out of the way like a bull fighter dodging a bull.  The wind was now blowing hard and the current was pushing us to shore.  He got so frustrated with us at one point he zoomed off to help someone else.  They managed to get hooked up in a very few minutes and he was back.  Between the ponga driver’s inability to hold onto our line, and my lack of experience, it took six times circling the bay to get us hooked up.

Yelapa and the mooring ball
Photo by Lynda Davis

Finally, we are here.  The main sail cover is on but most of the sail is poking out from underneath and refugee lines are everywhere.

While straightening things on deck, I noticed Lynda was just standing there, idling staring at the mountains.  Just as I was about to rudely ask her to help us, she bent over the side of the boat and puked.  I anticipate the boat could be fairly rocky in this bay.  It could be a very long night for my poor friend, Lynda.

The next morning, the ponga driver picked us up and took us to shore.  We got directions to the cascadia (waterfall) from an English speaking local and headed up the cobblestone path.  The sights and sounds of this rural hamlet are spectacular. 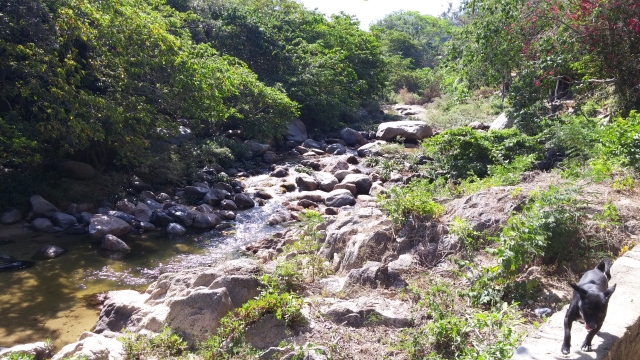 On the way to the Cascadia
photo by Lynda Davis

The Gate to the Falls
Photo by Lynda Davis

At the end of the trail we were greeted with a waterfall as promised.  Hot and sweaty from the long hike, we had our clothes off and our suits on before you could say, “Last one in’s a rotten egg.”  The cool water was exquisite after our 90 minute hike.

The Cascadia
Photo by Lynda Davis

Fully refreshed, we headed back to town.  After a quick stop for garlic lobster, we got a ride back to Penelope.

Going back, we had nice wind and made it across the bay in record time.  This time when I lowered the main sail I had the lazy jacks smartly in place.

For the first time since I’ve been here, the wind was out of the north rather than out of the south.  We had selected a slip which would allow me to pull in facing into the wind – until the wind decided to change direction!

Because the wind was coming from behind me and I was concerned about being blown into the dock, I didn’t get as close to the dock as I would have liked.  My crew committed the mortal sin of throwing the mooring lines to the helpful, or rather helpless, helpers waiting on the dock.  As to be expected, this resulted in a lot of loud hollering, “Wrap the line around the cleat.”  And the implied, “Just don’t stand there with the rope in your hand like an idiot.”

But, we landed safely which in and of itself is a success.  As they say, I learned more from my less than steller docking than I did from my last five perfect ones.

All in all it was a great trip and I’m very proud of myself for having the courage to take on the challenge.

Everyone already knows everything there is to know about me. I wear my heart on my sleeve. To learn current details. Visit my blog, CruisingwithCaptainPeterandtheAdmiral.
View all posts by Susan M. Gierga →
This entry was posted in Travel Log. Bookmark the permalink.