Anita says, “When dirty socks start to stink, it’s time to split.” With that, she had decided to leave La Paz the same day we were leaving.  We offered this very young, very pretty, very smart Israeli “traveler” a ride to the Mexican mainland.  I learned a lot. 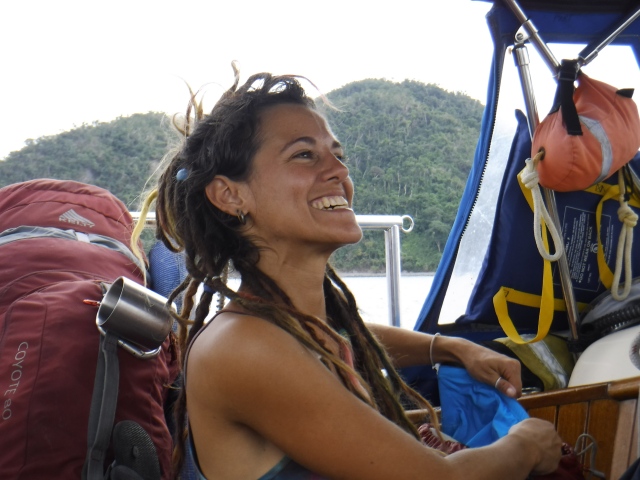 Anita is the oldest child of Yana and Vladislav Agape, born in Simferopol, Crimea in 1986. At the time of her birth her family lived in the dorm.  Both her parents were finishing their masters in physics at University while Anita was a toddler.

Her father went on to become a successful businessman. While the majority of people in Russia at that time were looking for food, the Agape’s lived in relative luxury in a rented home; driving two cars.  She grew up enjoying the fruits of upper middle class including dance, gymnastics and music lessons.

Anita describes her mom as inspirational. Besides being smart, her mom is adventurous.  She was an accomplished aerial gymnast and acrobat.  Sky diving was her hobby.

Soaring from the bow sprit

But, Yana was sensitive to the discrimination she endured in Crimea and longed to return to Israel, her spiritual homeland. Vlad was not keen on starting over after many years of building his business.

Pregnant with Anita’s younger sister, Nicole, Yana moved to Petah-Tikva, Israel when Anita was 10. Her parents continued a loving, long distance relationship for several years but the marriage finally dissolved when Anita was in High School.

Using her training in rhythmic gymnastics and classical music, Anita became a professional Break Dancer at 16. She performed at weddings, restaurants and in commercials with a group called the Lions of Zion.

She competed with the group in a World Championship Break Dancing competition known as Battle of the Year in Bronschwig, Germany.  It was the first time Israel was invited to participate in the event and Anita was proud to represent her county.

Like all young adults of Israel, Anita was required to serve two years in the military following high school. After her service she attended the University of Tel Aviv, majoring in Asian studies, arts and business.  She was still Break Dancing on weekends but found the sport was taking a toll on her body.

Once at work, Anita found it frustrating having only two weeks’ vacation per year. She found this did not provide enough time to travel the way she dreamed to.  She imagined crossing the Moroccan Dessert on a donkey.  With this in mind she became a “traveler.”  With her small savings from a few months of work she set off.  Her only commitment, an agreement with her mom to call home every two weeks.

Anita can live on no money when she needs to. It simply depends on how low you are willing to go to survive.  She reports, in America people are not so generous but they throw away more.  The stuff they throw away is good.  In poorer countries, people discard less and are more generous, empathizing with those who have little.

The contents of her life is contained within a backpack. Yet, from her backpack she pulls extraordinary things such as spices for cooking and the two-volume Collector’s Library version of Alice in Wonderland, which she let me read.

She hitchhiked through Europe visiting Belgium, Luxemburg, Switzerland, France, Andorra, Spain and Portugal. During a short visit back to Israel she contributed to Israel’s Burning Man Event helping to build a 30-foot wooden structure, The Hand of Inspiration.

She arrived in the United States with the intent of visiting National Parks. Over the next year she hitchhiked through California visiting Joshua Trees, Yosemite, the Red Woods, and Sequoia.  On to Arizona she saw the Grand Canyon.  In Colorado she saw Red Rock and Eldorado Canyon.  She hitchhiked on to Olympic National Park in Washington, visiting Yellow Stone and the Grand Tetons on the way.

Just before her U.S. Visa expired, she participated in the Burning Man Event in Nevada.  Anita prefers to hitch hike as she gets to meet the local people, who often share enthusiasm for their home and local knowledge.

Peter picked her up at the dinghy dock and she joined us on Penelope. Although she had only sailed three times, never on the ocean and never overnight, she plopped her backpack in the spare stateroom and signed on for a 400 mile, 3 night voyage across the Sea of Cortez. 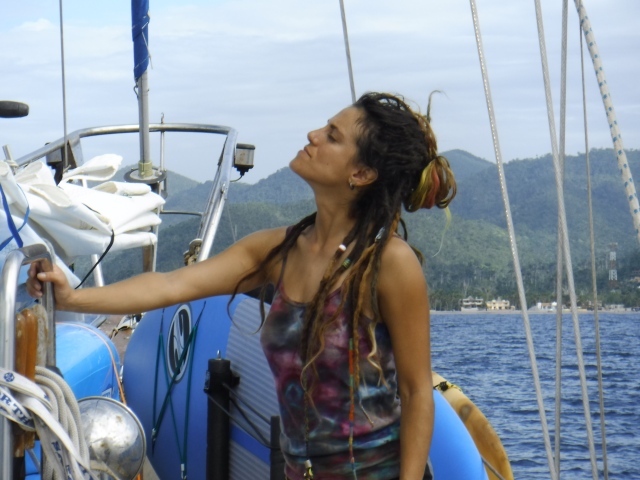 When she was young, her small stature and olive complexion earned her the nickname “gypsy.” She was wild as a child; climbing trees; jumping off roofs.  She had been called a gypsy for so long it seemed natural she become one.

Anita doesn’t think of herself as homeless, she thinks of herself as “home free.” She feels this gives her the freedom to choose her sleeping area and waking area.  She chooses her view every day.  She can always choose where she wakes up.

Few other travelers can keep up with her. She doesn’t like to stay in any one place more than a week.

Her intent is to learn everything she can in terms of local history, religion, culture, music, art, the people, language, food, customs, etc.  Anita is like a sponge, hungry to soak up knowledge from every corner of the globe. 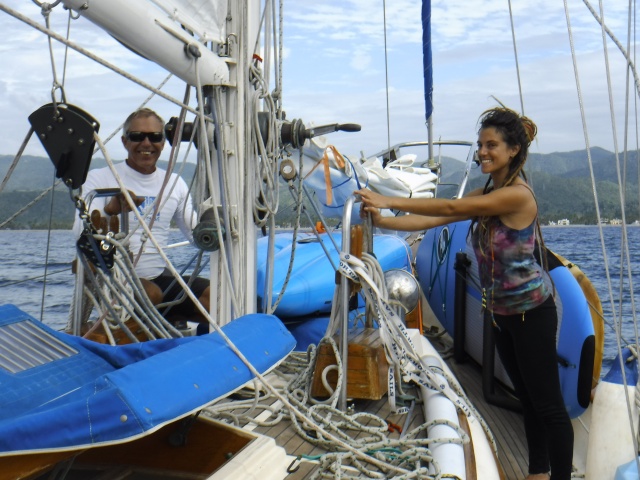 Her favorite passage from Alice and Wonderland, goes something like this:

Alice (speaking with the Cheshire Cat): “Would you tell me, please, which way I ought to go from here?”

Cheshire Cat: “That depends a good deal on where you want to get to.”

Cheshire Cat: “Then it doesn’t matter which way you go.”

Alice: “So long as I get somewhere.”

Cheshire Cat: “Oh, you’re sure to do that, if you only walk long enough.”

Everyone already knows everything there is to know about me. I wear my heart on my sleeve. To learn current details. Visit my blog, CruisingwithCaptainPeterandtheAdmiral.
View all posts by Susan M. Gierga →
This entry was posted in Travel Log. Bookmark the permalink.